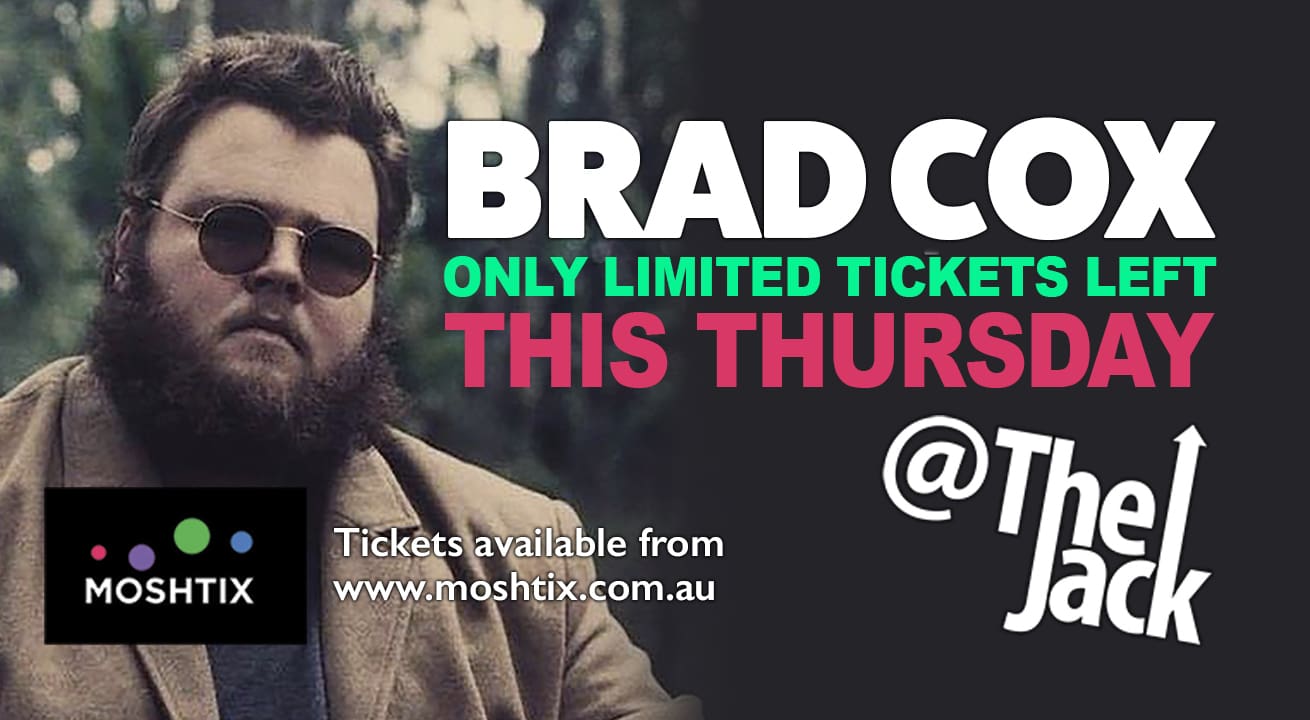 Brad Cox is hitting Cairns as part of his Drinking Season Unplugged Tour!

Brad Cox is coming to Cairns! Catch him at the The Jack as part of his Drinking Season Unplugged Tour on Thursday the 17th of September.

Having just released his new single Drinking Season, Jindabyne via Newcastle local Brad Cox has announced the addition of QLD dates to his very special and intimate Drinking Season Unplugged Tour. The tour has been selling out venues across NSW and ACT with strictly limited capacities. For many, this will be the first time so see Brad perform solo, and add to that the unique and intimate nature of these shows, you can guarantee this tour is one not to be missed.

Supporting Brad will be the recently crowned winner of the 2020 Toyota Star Maker, Townsville singer and songwriter Sammy White.

Hailing from the country town of Jindabyne, Brad’s career has taken him all the way to the country music capital of the world, Nashville Tennessee, to work with some of the city’s finest writers and producers. ‘Drinking Season’, written by Brad and Dan Isbell (Luke Combs) was written on one of these trips to Nashville, making the long haul flights worth it.

Since taking out the Toyota Star Maker title in 2018, Brad Cox has worked quickly to make a name for himself in the Australian country music scene. He has opened shows for Brett Eldredge, Jon Pardi, Randy Houser, Adam Eckersley and Brooke McClymont plus sold out his own shows on his 2019 ‘Give Me Tonight Tour’, which saw him play his biggest headline shows to date. Checkout a recap of the shows here.

Brad earned wide scale recognition in 2018 with his self-titled debut album that yielded the singles, ‘Red Light,’ ‘Too Drunk to Drive’ and ‘Lake House,’ as well as the anthemic crowd favourite ‘Water On The Ground’ which has notched up over 550,000 Facebook views and growing (watch here). The album earned the Jindabyne native two Golden Guitar nominations for Contemporary Album of the Year and New Talent of the Year. In 2020, Brad earned two further Golden Guitar nominations for his single ‘Rusty Strings’ (Apra Amcos Song Of The Year And Apple Music Single Of The Year). His previous release ‘Give Me Tonight’ earned widespread recognition with adds to Spotify playlists (Fresh Country, Australian Viral 50, Next From Nashville), Apple Playlists (Today’s Country, Breaking Country, Aussie Country) and Triple M (Metro, Regional, Country). To date, the track has amassed over 2.7 million global streams.